"After 2 months of letting our house go, I woke up, drank my Morning Cocktail, and went on a cleaning binge"

I tried this and thought, "why the hell not?" I'm definitely impressed. Woke up at 5 am and within a few minutes I hopped out of bed (when normally I would have hit the snooze), and got ready to go for an early morning run."

It is freaking amazing! I bought some for my brother and husband who both work early mornings and they both swear by it.

Class is boring, and you'd rather be snoring. Coming from the guy who probably spent more time sleeping through class than anyone else, I can assure you it's not a good idea (unless you want to fail your classes and waste tuition.)

Besides, you took the time to wake up, get dressed, and get to class on time in the first place. Doing all that only to pass out during the lecture makes your effort all for not. But staying awake during a boring lecture is harder than it seems. Sometimes you fall asleep without even realizing it.

So, how can you stay awake in class?

Assuming you're getting plenty of sleep, make sure you start your day off right with the nutrients your body needs to stay awake and alert. Sitting in the front row and engaging your professor are also great ways to stay awake in class.

In this post, we're going to cover the topic in a bit more detail - and if you keep reading, you'll learn about a secret we discovered that can help you supercharge your mornings and get sh*t done! Staying up all night - whether you're drinking, playing video games, studying at night, or just scrolling through your Instagram feed - is a recipe for disaster.

Starting in high school and especially in college, I'd stay up far too late, head to school running on a few hours of sleep, and make up for it in chemistry class. Needless to say, my grades reflected my sleeping habits.

Going to bed on time and getting adequate sleep is important, but has become harder than ever thanks to phones, computers, video games, etc. When there's so much stimulation around you, how can you not stay up late?

From one night owl to another, here's my advice:

Turn your phone on do not disturb at least one hour before bed, set your alarm far from your bed, and open a good book.

Instead of scrolling endlessly on your phone and exposing yourself to blue light (which disrupts sleep), you'll read yourself to sleep.

I'd also recommend using your phone on the couch, or at least not in your bed. You want your brain to associate your bed with sleep, not with staying up all night on your phone.

I've always liked taking a shower in the morning rather than at night because it acts like a 5-minute buffer between being asleep and wide awake. Cold showers especially help to wake you up, but even a warm shower will get the job done.

I'd usually get 3-4 hours of sleep on school nights back in high school - terrible, I know - and would shower in the morning in an attempt to revive myself before school.

Believe it or not, I've 'fallen asleep' in the shower standing up on more than one occasion.

Laying your head down on your desk is a recipe for disaster and you know it. Don't set yourself up for failure.

Although maintaining good posture may not be as comfortable as laying your head down, it's surely a better way to stay awake, not to mention the other positive effects of sitting up straight.

Additionally, your oxygen levels play a role in your alertness, and maintaining good posture actually increases airflow. Believe it or not, slouching can lead to 30% less oxygen intake than when you sit with good posture. Physics, calculus, and chemistry were three subjects I did not much enjoy but had to take for my STEM major. I found calculus especially boring thanks to my professor, and often found myself dozing off in the back of the class.

Drowsiness coupled with a seat in the back row can come back to bite you even if you don't actually fall asleep, but you stop paying attention.

You know when you're looking at the board and your teacher is lecturing non-stop, and you wake up half an hour later to a board full of notes you should've been taking? That happened to me all the time and I usually found myself scrambling to write everything down when I snapped back to reality.

Once I started sitting front and center, however, everything changed. You'll be far more engaged which will keep you not only awake but actively soaking up information. If you sit still for an hour or more without opening your mouth or moving your body - especially if you're listening to someone ramble on about a topic you don't understand nor do you particularly care for - it's no wonder why you often find yourself falling asleep.

Asking questions, coupled with sitting in the front row, is a great way to stay awake in class. You don't wanna be that one guy who has a question every five minutes, but it's important to speak up when you don't understand something.

Surely there's something the professor says that you don't understand at least once a class period, but not asking about it does you no good. Not only will you likely miss that question on a test, but you're also more likely to doze off when you're not actively participating in the discussion.

Do yourself a favor and ask questions in class. You'll learn more when your questions are answered, not to mention the fact that you'll actually be awake for the class rather than slumped on your desk looking like a moron.

Going to class dehydrated is like trying to drive your car without any gas. After sleep, water is the second most important thing our bodies need to function properly.

You lose roughly 1 pound while sleeping by breathing at night, which is why you often wake up feeling parched.

That's why having a glass of water waiting for you next to your alarm is a great way to wake up in the morning. Trying to wake up without hydrating first thing in the morning is like trying to jump-start a car that's been sitting in the freezing cold all night.

Fill a glass of water and leave it on your nightstand the night before so it's ready and waiting the next morning.

Hydration isn't the only issue you face first thing in the morning. If you want to eliminate the groggy feeling when you wake up, you'll need a quick source of fast-acting, long-lasting energy, and mood enhancement as well.

At Club Early Bird, we're all about getting up early to get sh*t done, both in college and other aspects of life. We're a community of go-getters who want to wake up and master their morning.

Waking up early is A LOT harder than it seems, especially if you're not a morning person.

That's why we set out to discover the secrets to wake up early feeling great, without wanting to hit snooze and climb under the covers. You can click here to learn the 3 secrets we figured out to master your morning - but for now, here's the bottom line:

After a ton of trial and error, I've made a breakthrough discovery that makes it EASY to Wake Up Early and Get Sh*t Done (which is now the EarlyBird mantra). 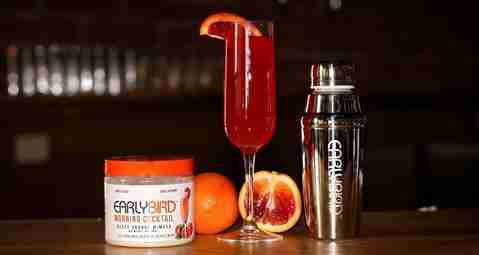 Early Bird also has a ton of natural, clean energy ingredients from fruit and veggie extracts, which make the snooze button a thing of the past.

So yeah, you can spend many more months hating your mornings, or you can check out Early Bird by clicking here, wake up early, and get sh*t done.

Keeping your mouth busy keeps your mind awake and ready to soak up information. That's why chewing gum is a terrific way to reduce sleepiness. Grab a pack of gum the next time you think you'll doze off in class!

According to Healthline, mint has many health benefits and can stimulate the hippocampus, which is the part of your brain that regulates your alertness and ability to think critically. A happy hippocampus translates to a productive day in class.

I'm not saying you should drop to the floor and crank out push-ups or do jumping jacks in the middle of class (unless you want to impress the spicy señorita sitting next to you.)

But getting your blood pumping will definitely help you stay awake, and can be accomplished simply by walking for 30 seconds. I'm not sure if this is a thing at every college, but the professors at my school didn't care when you arrived or left the class, and getting up to grab a drink was never an issue.

When I found myself getting sleepy, I'd usually go for a drink of water and return to my seat feeling refreshed, at least for the time being.

Taking morning classes is a great way to frontload your workday, but it's not for everyone. If you still can't stop falling asleep during class, even after reading our post about surviving 8 AMs - then they're probably not for you.

Most college-age students are the most awake between 11 AM and 6 PM, so I'd recommend trying to schedule all of your classes during that time frame, assuming it fits with the rest of your life.